Thanksgiving dinner was awesome! Great food, even better people. We ate at my aunt's house and it was a pretty full house. My family of 5, plus my boyfriend, plus their family of 4. I was sad that my grandparents didn't come into town this year. Now I probably won't see them until Christmas :(

Anyways, I brought lots of food and when I got there, I found that my aunt had made roasted root vegetables for me in what she called "an experimental recipe". She sounded worse than me saying I didn't have to eat it if I didn't like it (I say that all the time). It was acorn squash, rutabaga/turnip, parsnip, carrots, roasted in oil and topped with oj. It was pretty good.

Everything I made turned out to be from La Dolce Vegan (by accident). But what a good accident. I made the tofu roast, which is like a homemade tofurky, the kalamata mashed potatoes sans olives, and the merciful miso gravy. It was so good, the best Thanksgiving dinner I've had in a long time. The roast turned out perfectly.

The roast was a great source of stress for me this weekend. First I discovered I hadn't bought enough tofu...I needed two pounds and I had 50 g less than that. So when it came to making the tofu shell, which was supposed to be an inch thick all around, it was much less than that. So I had to use less of the stuffing that the recipe made. But, given my tendency for disaster, it actually went really well. It has to sit in the fridge overnight, so if you make this one, make sure you have time. Then yesterday all I had to do was whip up the basting sauce, transfer the roast to a pan, baste the roast for an hour and a half, and serve! It was all in all, pretty easy.

The tofu shell is well-drained tofu mixed with tamari and sage. The stuffing is veggies, raisins, seasonings, bread and walnuts, and is very yummy.
Here's a picture of it with some of the basting sauce on it, before the oven (you can see the marks from the cheesecloth that the shell was formed in): 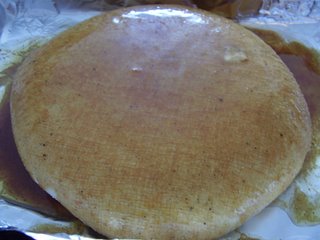 And a picture when it was done: 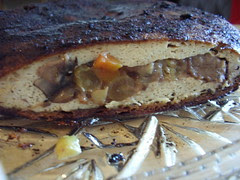 It had a crispy, crunchy outside, and a soft chewy centre, and the stuffing goes perfectly with it. Of course, I smothered it with gravy.

Dessert, the pumpkin tofu cheesecake, was the best tofu cheesecake I've ever had! I've made a few before that tasted way too much like tofu. This one had a chance to be refrigerated for a day and a half before, so the flavours had settled. Mmmm, it was perfect. Everyone else was feasting on apple pie, pumpkin pie and New York style cheesecake. I would've felt so deprived if I hadn't made this. And it was the nicest looking dessert there, since everything else was storebought ;) It had just enough pumpkin and wasn't too sweet. Another Wolffie winner. 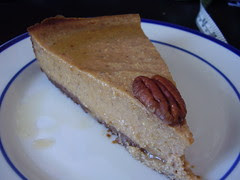 Also, I had said I would be using up some pumpkin. Two pumpkin smoothies helped with that, and I used the pumpkin chip muffin recipe from the veganlunchbox blog to use up the rest. The only changes I made were to nix the nuts and add more chips (I used chocolate not carob). These are a delight! Like she says, a great way to get some orange veggies in you. I'll be making these again, for sure. They make a great snack for lunches. 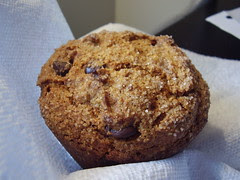 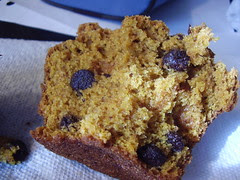 You may have noticed a change with my pictures. The first one was uploaded through blogger, the rest through Flickr. Blogger wasn't going to let me post more than one picture, and I'm fed up. I can't get the same size picture as blogger, but I don't want them too huge. I may be experimenting for the next few posts, bare with me!
Posted by Melissa at 12:35 PM

wow - I'm totally impressed by the tofu dish and the pie! Any tofu pie I have made turns out tasting like raw tofu...yuck...but I like the sounds of this one.

Megan, you should try it then. I hate having desserts tasting too much like tofu. The other ingredients cover it up nicely.

Loks like everyone who ate your food had a lot to be thankful for.

that pumpkin cheesecake pie looks fab! i've been eye'ing that tofu roast, and wondering if it *really* turns out, ykwim? glad to hear that it's yummy. perhaps i'll try it for christmas.. i'll definately be makin' that pie!

Urban Vegan...they would have been. But unfortunately I was the only one eating it. A few people tried the roast veggies my aunt made for me though. But at least things went off without a hitch, and no one made fun of it either ;)I was thankful, that's for sure. Good food, good people.

Thanks Michelle, I always wondered that about the roast too, if it was too good to be true or not. But I'm very pleased with the results. And its great as leftovers too!

Hi Melissa,
where can I find that pumpkin cheesecake recipe? I would love to make one for my family this Thanksgiving, it looks delicious.

Anon, its in the cookbook, La Dolce Vegan by Sarah Kramer.

I love when my husband and i pass time together specially when we are with all the family celebrating the thanksgiving. Is sure this year we´ll be happy all of us together and enjoying. But i am thankful because my husband buy viagra and he has more self-steem.I am really happy.

Melissa
No vegan politics here...just good food! This blog reviews vegan cookbooks and their recipes and chronicles my cooking adventures for myself and my omni husband. Also, as a new knitter, I will write about my experiences with vegan knitting.